What is a Balint group? 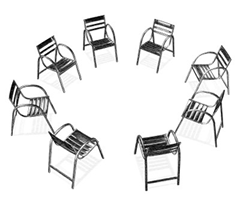 During the 1950’s in London Michael Balint, together with his wife Enid, led groups of other medical doctors in an effort to help them better understand what was happening in the patient-doctor relationship.  The experiment was so fruitful that it has become a well-established method of training for health professionals, not only in London, but also in other European countries as well as in the U.S.

The group usually consists of five to twelve (ideally eight) health professionals and a trained facilitator.  The one and a half hour session begins by one of the participants offering to present an interaction between himself and a patient who is, for one reason or another, causing him difficulties or concern.  The group then discusses the situation he/she presents, with an eye and ear as to what the patient is trying to communicate – probably unconsciously – to his care-giver.  Most likely the health professional will come to see what has been his own unconscious participation in the scenario his patient has brought about.  He perhaps will also become aware of some of his own personal conflicts that have tended to involve him in the enactment, but these remain private and do not usually come to the attention of the group.  With his new understanding the presenter is then better able to deal with the difficult clinical situation.  Most often he will report at the beginning of the next Balint group meeting about the changes that have subsequently occurred in his patient’s medical situation and in the patient-doctor relationship.

This group work is usually very exciting and rewarding.  Health professionals who are courageous enough to present find that it brings a great deal of relief.  Clinical work becomes easier and much more pleasant.

My experience as a Balint group facilitator

My role as a Balint group facilitator began while I was on the staff of the outpatient psychotherapy department of psychiatry at the university hospital in Frankfurt, Germany.  The Balint groups I led began as part of the training our department offered medical interns.  Some of the participants in my groups then joined the Balint group that was part of my private practice for many years, finding it to be most helpful to their professional development as a physician.  Other very experienced physicians joined the group as well, in order to obtain help with the difficulties they found themselves confronted with in their clinical work.  This Balint group was what is called a “slow-open” group, meaning that participants came and went, according to their needs.  I was the facilitator of that Balint group for over twenty years.

Registration for a Balint group

If you are interested in becoming a member of a Balint group, please let me know.  I will put your name on a list, and as soon as there are enough members for a new group, I will let you know.